For the last couple of weeks, I’ve had a new addiction. It has replaced housekeeping and blogging (both reading them and writing them) and television. The only thing I’ve managed to do besides the new addiction is read. This addiction is called Civilization IV.

I suppose it’s not too surprising. Although I was never a big player of military strategy games, such as Risk, when I was a kid, CivIV is basically a large scale game of the Sims. You’ve got to make money, keep everyone happy and healthy, increase your skills; it’s just that you’ve got the possibility of war in this game. (I think war is what Wil felt was missing from the Sims.)

This new addiction is Wil’s fault. He downloaded a demo for a new version of Civilization called Civilization Revolution, for the PS3. This is a scaled down version of the computer versions of Civ, which could take up to weeks to finish a game, depending on how many people were playing. This version allows you to sit down and play multiplayer games online with your friends, and finish the game in 2-3 hours. It’s a turned based game, like a board game.

Civ: Revolutions is just so darn cute on the PS3, I watched Wil play a couple of times, and then when he went to work, I started the play. Blammo. Hooked. The demo only lasts 100 moves which is not much at all. I remembered seeing a demo for a Mac version somewhere, for CivIV, so I downloaded that. Blammo! Hooked again. I bought the game and we’ve been playing ever since.

When I play on my own, a game will last about 3.5 hours, easy to sneak in a game while Wil is at work. When Wil and I play together, I think a game averages 22 hours. And man, it is fun. There is pretty much nothing better in the world than getting all caught up in a great game with your sweetie. And eating snacks at the same time.

When I play by myself, I am the epitome of peace. War, what is it really good for? Nothing, I am trying to win a Cultural Victory. But when Wil and I play together, it’s him and me against the world. And we’ve developed a bad habit of wiping everyone else off the planet and splitting it equally. In the beginning, I was blood thirsty. It was great fun to wipe out the bad tempered Aztecs, they were such a pain in the ass. Or the arrogant Russians. But, it’s gotten a bit old. So we’ve upped the difficulty on this latest game. So it’s not so easy to conquer the world. Currently, I am playing America, he is China.

The civs I like playing the best are: America (Roosevelt), Arabia, Russia (Catherine the Great) , Egypt and Spain (Queen Isabella). Honorable mention for India (Gandhi) as well. Will seems to stick with Mongolia or China. Note: I always rename the capital city to from the default Washington to Seattle, when I play America.

Oh, if you have PS3, you should buy the Civilization: Revolution. We could play together. I’ve already informed Evildeb I’m kicking her ass and taking her Great People.

July 11th. We all know that, with my current lifestyle, I don’t really need one, but I want one. I put myself on a waiting list, because Wil is getting me one for our anniversary, which is next month.

My question is, I put myself on the list for a 8GB. Because, I can’t bring myself to acknowledge how much money this is going to cost, just for the calling plan and data plan. It’s incredibly indulgent, considering. Oh, the question is, do you think I’ll regret going 8GB instead of 16? I have an 80GB iPod I use for music, and that’s what I use in the car. So I am not planning on putting music on the iPhone, really.

My natural inclination is to get the biggest, but I just don’t know if it’s necessary. Any iPhone users out that have an opinion?

Woot! Maybe in time for my birthday?

In different circumstances, Dr. Stevil and I would have had a date last night, at the Apple store.

The new OS, OS X 10.5 aka: Leopard, was released last night. Typically, the Apple store closes for an hour or two, and reopens with great fanfare in the evening. People line up, everyone cheers and tchotchkes are distributed. According the emails I received a couple of weeks ago, there were to be free tshirts last night. Steve and I have gone to the last few OS X releases together.

Sadly, there are no Apple stores in BC. There are plenty of resellers, but the only official Apple stores are in Toronto. Stupid Toronto.*

Wonder why people line up hours ahead of time for an OS? Well, either you get it or you don’t. If you don’t, I can’t begin to explain to you the visceral pleasure of being a Mac user. Be happy in your PC use, I wish you all the best. I’m not sure I would want everyone to love the Mac the way that we faithful do. Although, one of the people on the tech show “Attack of the Show” made a disparaging remark about Apple products and I now refer to her as That British Bitch (she’s the only British one on the show, or I’d have to come up with a different Bitch label. That Brunette Bitch?) and flip the tv off when she shows up on screen. Lucky, she’s a minor feature on the show. So maybe you should be happy in your pc world, and be careful about what you say about Apple around me. I’m kinda sassy.

No, seriously, don’t even try to Apple bash with me, I find I have very strong feelings about it.

I’ll pick up a copy of Leopard later this weekend and let you know what I think. I could just save time, however, and say, right now, that it ROCKS and I LOVE IT. Because you know both are going to be true.

*it’s ok, apparently hating Toronto is a national pastime for all Canadians living in Not Toronto. I don’t know why, I’ve never been there. I’m just trying to fit in.

I’m a regular reader of Mark Morford, I have a big crush on him, in fact. Today’s article reads as though it was written especially for me. And, maybe, fellow mac fan Dr. Stevil. Frankly, we feel a bit dirty now, after reading it. In a good way.

Anyone have a cigarette?

Evildeb has a new love. A new all consuming love. For Johnny Cash. She wants to have his babies, although she knows he is dead. Which makes it difficult. She now speaks to me primarily in lyrics. From Johnny Cash songs. She says it won’t last forever, but I am still a little worried. She’s been pretty stressed lately. She kept telling me that she got married in a fever, hotter than a pepper sprout. I don’t even know what a pepper sprout is. Luckily, she has next week off. Hopefully, she’ll sit quietly and let her brain relax. Although I doubt it.

Just so you know, as I write these words, I am watching them appear on my brand new 23″ Apple Cinema Display. They look gorgeous! Later, I’ll write the words on my brand new 15″ Powerbook! But I am currently in the process of setting it up.

Jodi bought herself some presents today!

This is going around the office, but I also read it over at A Slightly Insane World. It’s the latest attachment for the iPod. And it’s genius, really.

I want to thank all of you who sent comments and email with your thoughts for me and my family. It meant a lot to me. I called in weepy to work, but went in around lunchtime, because I thought it would be good to be productive. But you know, productive doesn’t always come easy. I feel better now, and though I didn’t really feel like blogging, earlier, I thought that Grandma would want me to. Actually, Grandma would just like me to wear something a little more feminine than the jeans I have on right now, that’s what Grandma would have wanted. They have a hole in the butt! I mean really, Jodi, can’t you dress like a lady for once?

Also, thank you to all who sent comments and email with your thoughts, and funny links, for me and my internet connection. It meant a lot to me. Apparently the secret to getting it back was waiting around. Seriously, I don’t know why it works now. It did not work this morning, it works now. When it wasn’t working this morning, on my mini or tower, it was still working on my powerbook. So… I don’t know… god hates me? It’s possible. I’ve been making plans for renewed focus on Satan’s Bookclub. And let’s not even go into what I was doing when I lost the connection in the first place.

Ok, so, here, to honor the memory of Grace, my always stylish and fabulous paternal grandmother, I give you a sassy bathing suit shot of the two of us. 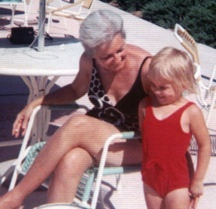 I cannot connect to the internet at home right now. Not reliably. The only computer the works is my laptop, which I happened to bring home with me. But, this is unacceptable. I’ve spent hours on this thing. HOURS. It has something to do with the DSL modem and the router. Or maybe just the modem. And the computers. But not the laptop. There is no logic. God help me, I might have to call tech support. I don’t even know which thing I need tech support for, at this point. Considering what I do, and the operating system I chose to use, I am the last voice you want to hear on the receiving end of a tech support call. Especially considering how completely INSANE I’ve become by now. Let us just imagine together…

Me interrupting: Yeah… do you have a mac?

Me interrupting: When does your mac guy work? I know you have one… at least… he probably only works for 15 minutes on Tuesdays and every other Thursday, right?

TSA: Sure, but maybe I can help you.

Me: Sigh, alright, sport, give it a try.

TSA: Ok… [deep breath]… what version of Windows are your running?

TSA: Please hold while I transfer you.

You’d think I’d be more sympathetic or something. God knows I would never put up with me if I had to tech support me.

Dan pointed me to an article that says the Sims2 is showing up early in some stores. But.. but… if I go get it today, if I can find it, I’ll never clean the bathroom before my Grandma gets here. However… I have noticed a trend when she visits, she likes to feel useful. She tends to clean anyway.. so.. um.. maybe.. NO! I have to clean my own bathroom! However, I might just need a jamba juice for lunch. And the jamba juice is just two doors down from the Apple store, so if I happen to walk by and peek in….

I have zero willpower.