For the last couple of weeks, I’ve had a new addiction. It has replaced housekeeping and blogging (both reading them and writing them) and television. The only thing I’ve managed to do besides the new addiction is read. This addiction is called Civilization IV.

I suppose it’s not too surprising. Although I was never a big player of military strategy games, such as Risk, when I was a kid, CivIV is basically a large scale game of the Sims. You’ve got to make money, keep everyone happy and healthy, increase your skills; it’s just that you’ve got the possibility of war in this game. (I think war is what Wil felt was missing from the Sims.)

This new addiction is Wil’s fault. He downloaded a demo for a new version of Civilization called Civilization Revolution, for the PS3. This is a scaled down version of the computer versions of Civ, which could take up to weeks to finish a game, depending on how many people were playing. This version allows you to sit down and play multiplayer games online with your friends, and finish the game in 2-3 hours. It’s a turned based game, like a board game.

Civ: Revolutions is just so darn cute on the PS3, I watched Wil play a couple of times, and then when he went to work, I started the play. Blammo. Hooked. The demo only lasts 100 moves which is not much at all. I remembered seeing a demo for a Mac version somewhere, for CivIV, so I downloaded that. Blammo! Hooked again. I bought the game and we’ve been playing ever since.

When I play on my own, a game will last about 3.5 hours, easy to sneak in a game while Wil is at work. When Wil and I play together, I think a game averages 22 hours. And man, it is fun. There is pretty much nothing better in the world than getting all caught up in a great game with your sweetie. And eating snacks at the same time.

When I play by myself, I am the epitome of peace. War, what is it really good for? Nothing, I am trying to win a Cultural Victory. But when Wil and I play together, it’s him and me against the world. And we’ve developed a bad habit of wiping everyone else off the planet and splitting it equally. In the beginning, I was blood thirsty. It was great fun to wipe out the bad tempered Aztecs, they were such a pain in the ass. Or the arrogant Russians. But, it’s gotten a bit old. So we’ve upped the difficulty on this latest game. So it’s not so easy to conquer the world. Currently, I am playing America, he is China.

The civs I like playing the best are: America (Roosevelt), Arabia, Russia (Catherine the Great) , Egypt and Spain (Queen Isabella). Honorable mention for India (Gandhi) as well. Will seems to stick with Mongolia or China. Note: I always rename the capital city to from the default Washington to Seattle, when I play America.

Oh, if you have PS3, you should buy the Civilization: Revolution. We could play together. I’ve already informed Evildeb I’m kicking her ass and taking her Great People.

Tuesday I started a new round of swimming lessons: Level 4. Contrary to what logic may tell you, Level 4 is not one level above Level 3. Turns out, it’s a gabazillion levels above it!

Level 3 class is held in the middle lap pool. I imagine the deepest point of that pool is possibly 6 feet in the middle. Shallow enough that I can bounce up and down on my toes, should I need or want to. Our class was full, and was conducted in one lane. Therefore, it was often necessary to wait on either end for the swimmers ahead of you to make some progress, some room, so you didn’t run into them. Everything I did was easy and manageable. I felt proud of myself after every lesson.

The difference between L4 and L3 is like the difference between walking briskly down a path and running down it. L4 is conducted in the Deep End. I am unsure of the length of either the Deep End and the middle pool, but I’d guesstimate that the lanes in the Deep End are 47 times as long as the middle pool. I might be overshooting a bit. Our class is only five people, and we have two lanes. Plenty of space for everyone. No need to wait after the first length.

I’ve known how to swim since I was a little girl. I am in no danger of drowning. However, swimming in deep end is just DIFFERENT. If someone in the next lane kicks a giant wave onto your face while you are doing the back stroke, and you start to cough and sputter, there is no bouncing up and down on your tippy toes while you catch your breath. There is something a little intimidating about that.

Everyone in the class is at a slightly different level than everyone else. In L3, I would say I was at the top of the skill level pile. Now I am definitely at the bottom. When I got in, the teacher told me to swim the front crawl out and back. He wanted to see my crawl. What he probably saw was a stroke I like to call “The Spaz.” My best stroke. I got down to the end of the first length and I was wiped. Out of breath and starting to get a stitch in my side. I guess I thought because walked everywhere in my neighborhood instead of drove, and walked up three flights of stairs instead of taking the elevator, I was in ok shape. I am, compared to the shape I was in a few years ago. But people, swimming is HARD WORK. Lest you forget.

I made it back down the second length and stopped to catch my breath. When I could speak again, I told my teacher that I probably needed gasp A LOT of work gasp on my gasp gasp endurance. Obviously. So I switched to backstroke for the rest of the class. There is more oxygen in the backstroke.

When I got home, my arms were shaking and I was very disappointed in myself and my performance. At first. But then I realized, L3 was helpful to work on my form, but it was not a challenge or a workout for me. This class will be. And yes, it’s hard to suck at something. But I would not improve unless I had that challenge. Right?

July 11th. We all know that, with my current lifestyle, I don’t really need one, but I want one. I put myself on a waiting list, because Wil is getting me one for our anniversary, which is next month.

My question is, I put myself on the list for a 8GB. Because, I can’t bring myself to acknowledge how much money this is going to cost, just for the calling plan and data plan. It’s incredibly indulgent, considering. Oh, the question is, do you think I’ll regret going 8GB instead of 16? I have an 80GB iPod I use for music, and that’s what I use in the car. So I am not planning on putting music on the iPhone, really.

My natural inclination is to get the biggest, but I just don’t know if it’s necessary. Any iPhone users out that have an opinion?

Some people have asked me how one would go about punching a beaver in the face. First and foremost, I want to remind you it was not my idea to do so, but Stephen Colbert’s. However, I can think of 3 ways right off the top of my head.

First, find a beaver and then do one of the following:

This is a big deal in Canada. The loss of the Hockey Night song. I guess, it’s considered almost a national anthem. I’ve never heard before now.
Nonetheless, when I saw this on the Colbert Report the other night, I watched it 5 times and laughed every time, in the way only an American living in Canada truly could, there was a bit of a snicker to my laughter.

It’s hard to explain why that is so funny to me, given my particular situation. It’s not that anyone is mean to me because I’m American. However, there are times when they discuss America, and Americans, and it makes me feel … engulfed, in a way. It’s somewhat “underdoggish” type of feeling, only not nearly as competitive. I’m not sure I am able to explain it, without making it sound like a US vs. Canada thing.
It’s really more of a foreigner in a foreign land thing. Trying to fit in and find a place for yourself. And one of your own, one of your peeps, comes along and stakes a tiny little claim. While being as stereotypical an American as possible. (American things = waving a gun around. I do enjoy hot dogs, tho.) I imagine a reverse scenario would be as funny to a Canadian living in the US. If Rick Mercer stole the theme to ABC’s Wide World of Sports.
Ok, that show isn’t even on anymore, but it’s the only iconic American Sports Theme I could remember.

This is very funny to me. Of course, that could be because I am not a Republican. And, I’m not so stupid as to believe everything is this black and white and all Republicans are evil, so don’t bother trying to engage me in a political debate.

Obviously, these last few posts are lame attempts to “blog” without actually putting any work into it. Shame on me. I will try to have some fresh, wordy content for Monday. I’m attempting to restore some kind of structure in my life.

I’ve done something like this before, but I’ve had the flu for the last few days, and I figured that copy and paste was about all the energy I had right now. Plus pictures are pretty. Oooooo….

1. Type your answer to each of the questions below into Flickr Search.

2. Using only the first page of results, pick one image.

3. Copy and paste each of the URLs for the images into Big Huge Lab’s Mosaic Maker to create a mosaic of the picture answers.

1. What is your first name?

2. What is your favorite food? right now?

3. What high school did you go to?

4. What is your favorite color?

5. Who is your celebrity crush?

6. What is your favorite drink?

7. What is your dream vacation?

8. What is your favorite dessert?

11. What is one word that describes you? 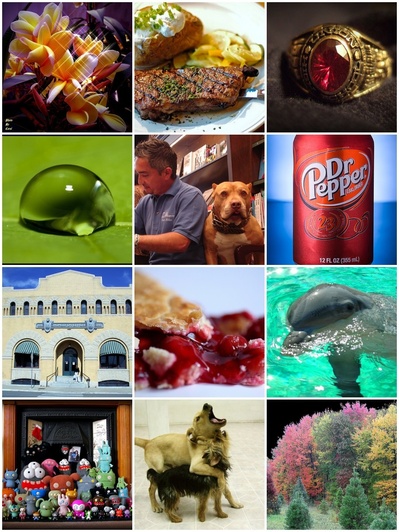