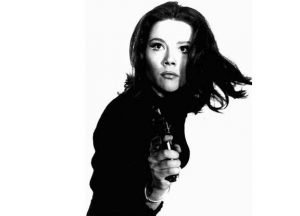 This is a random picture of Emma Peel I found on my hard drive.

For the past few months, I’ve been thinking about getting back into blogging. No, this isn’t an April Fool’s joke. That would be a lame joke. But I have been thinking about it, mostly because I miss the writing. And something about Spring just makes you want to start something. Blogs aren’t what they used to be, but I’m old, I don’t have to worry about what the kids are using these days.

In my mind, I was thinking about the necessity of a redesign, I barely remember how to use WordPress. But then I thought, no… a redesign is just a procrastination. I don’t have to have a fancy new look to start blogging again. It’s similar to a policy I’ve decided, just today, to adopt regarding the apartment. I’m always putting things off due to lack of organization. When the kitchens is better organized, I can cook healthy food, for example. Today I have decided to just proceed as if my apartment was already tidy and organized. Same with blogging.

Last summer I became a big fan of RuPaul’s Drag Race, so expect to see stuff about drag queens. I went to a show last week, and I have another this Thursday. I’m getting back into making Sims Let’s Plays on YouTube. I’ve also renewed my interest in tarot, participating in an Instagram challenge in March resulted in the purchase of six new decks. eeek! I bullet journal now, and my collection of pens is becoming a space issue. I’ve signed up for an online handwriting course, to improve my penmanship. I’m starting an online tech writing certificate intensive on the 5th, through Bellevue College. It lasts until July 21st. So there is that. I have 4 cats now, they are my children. And I’ve developed a huge nerd crush on a woman named Benebell Wen, so I am going to be taking her online astrology course. Because I’ve adopted a new policy in life: if it interests me, I’m going for it.

All this and more IF I continue blogging after today!

One thought on “What a fool believes.”