I know you do. They are very beautiful, thanks to my cousin-in-law, Bryce.

That closed mouth smile I have during the ceremony is apparently my face in a war between giggling, appearing properly serious, and revealing my discomfort at being the center of attention.

We had some furniture delivered yesterday. I told the guy, on the phone, that my husband was on his way down to help. And then I laughed and laughed and laughed. Not because Wil would not be much help, obviously. Because it was weird. In fact, the guy left the table and chairs at the front door of our building with him and took off, Wil brought them up himself.

I tipped him 20 bucks and some smooches.

Forgive the quality, but it’s a still from a video. One of the many weird faces I made during the ceremony. 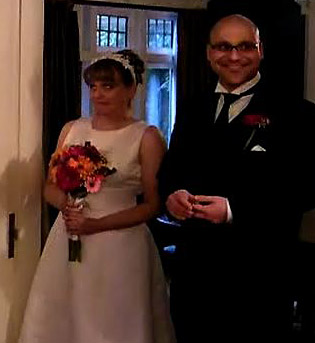 My opinion is, getting married becomes a lot more fun once the ceremony is over. We had a lot of fun. Took everyone out to dinner and I had delicious bellinis. We opened presents. It was all good.

When my cousin is done with the photographs, he will put up a flash site, and I’ll probably link to it, so you can see it all photoshopped. The way life should be.

It would appear that many of you were moved by the lack of cake in my life. I should add, I chose not to have a wedding cake. We are going out to dinner after the ceremony, it’s not a traditional reception. Plus, I always hated that feed the cake to each other thing. Nonetheless, it was a shocking lack of cake.

My friend Fee was so moved, in fact, she has arranged to have 2 dozen cupcakes delivered to my hotel this afternoon. How much does she rule? SO MUCH! So DON’T WORRY ANYONE! I will be having cupcakes. I think 24 cupcakes oughta just about do me.

I think the Harry Potter/ Air Conditioning plan would have worked a little bit better had they remembered to keep the a/c on in the goram theatre! I went out before the movie and told them it was freakin’ hot in there. They turned it on and it started to get better, but halfway through it started to get hot again. However, I was unable to leave to tell them to turn it on again because I was sucked into the magical land of Hogwarts.

The movie was good. Obviously, lots of stuff, from the book, has to be left out. But it wasn’t too bad. We went to see it in an IMAX theatre. Part of it, the “exciting finale” was in 3-D. When the green glasses flashed on the screen, you could hear a collective “OooooOOooo!” as we all put on these giant glasses. Wil was right, it made us all look like Elton John. Wil is not a HP fan, he went to see it for me. But I think he thought it was ok. It was no Die Hard, but then few things are. Except for, you know., Die Hard.

After the movie, I realized I really did need to re-read “The Half Blood Prince” before “Deathly Hallows” comes out. Normally, I would have read “Order the Phoenix” before going to the movie, but all my books are down in the states. So I went to Chapters and bought a paperback of HBP.

When I walked up to the counter, everyone was engaged in deep discussion and it took a minute before anyone realized I was standing there. The clerk explained to me that they were preparing for the release of Deathly Hallows on the 21st. I told her I understood completely, I was doing the same thing. They asked me if I had pre-ordered and I said I had (although didn’t mention it was on Amazon.com) and then I had to explain to them the incredible dilemmas I had faced while doing so. You see, the US has one cover version, and Canada/UK has another. All my books are US hardback books. Frankly, I prefer the US covers by far. But that isn’t even the important part, the important part is, all my books must match.

So, what to do? Order the US version and have it shipped to my mom’s house you say? Well, that is all well and good but the book comes out on the 21st. And my mom happens to be returning home to the states FROM Canada on the 21st. Who knows when she’ll be back. Drive over to the border and buy one in Bellingham? Can’t. And we’ll talk about why I can’t later. Order a US version and have it shipped to Canada? But that might take more time, everyone would have their books and be reading it, and I’d be WAITING!!

After much discussion with concerned friends and loved ones, it was decided I would buy a copy from Amazon.ca, and my mom would buy me a copy at Costco for 189%, or whatever, off, and bring it to me when she came up next. I would then donate my UK/Canadian version to the library. I took the opportunity to order the copy with the ADULT cover. The UK/Canadian releases have covers that are supposed to appeal to the Adult reader. And I am an ADULT.

The clerks wanted to know if I was going to be there at the big release party next Friday to pick up my pre-ordered book (that I did not pre-order from them) and I told that I could not, as I was getting married that day. Ooohh… isn’t that wonderful! Was I going to have a Harry Potter theme wedding? Ha! Even I draw the line at that. Besides, even though he’s not a HP fan, Wil seems positive that he’s Slytherin. And there is no way I’m going to be caught marrying a Slytherin. In public.

Well, since you asked, the wedding plans are coming along nicely. I got the license the other day. Guess where I got it. Go on, guess! The mall. For reals! It’s a pretty big mall.

We are having a very small wedding. A step up from city hall, maybe, still very small. No bridesmaids, no groomsmen, nothing like that. I’m wearing a wedding dress, tho. My mom and I found it the first place we stopped, a consignment store in Kirkland. She’s taking it in, and up. It’s going to be tea length. Less formal. I decided I would carry a bouquet, so I would have something to do with my hands. Today we had a fitting for Wil’s tux. He looks goooood. We got the rings, what more do we need? That’s it, right? Am I forgetting anything?

If you have a pressing need to get us a wedding gift, Wil would like everyone to know that WE would like a robot.

Ok, brace yourself, because here are the things I am going to be bitching about for the rest of the summer.

1. Planning my … OUR… wedding, which takes place in 5 weeks. Surprise!

2. Getting the stuff together to apply for my VISA, and Wil’s sponsorship of my VISA, which has to be completed well before Sept. 1st.

The visa application asks for verification of things that we simply cannot verify. I have not kept track of everywhere I’ve lived since I was 18 years old. And I KNOW Wil has no clue. It has me a bit worried.

But hey, I’m getting married! We were trying to keep it quiet, but we failed, so I can blog about it now. You may congratulate me…. NOW.

EDITED TO ADD: Ok, I should take the bitching about the wedding back. Everything has been really easy and worked out well so far. And I promise this won’t be a topic of much discussion other than to describe how easy it’s been. It will all be over in five weeks. The wedding part. I’m sorry I can’t invite you all, but it’s very very very small and simple. But I know I hate hearing people talk about their upcoming weddings, so I won’t do that to you.