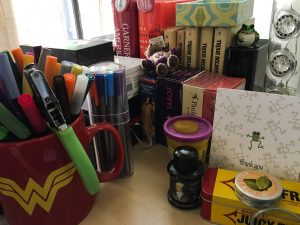 Corner of my desk.

I think I’m spring cleaning. Maybe. The last four days I have spent several consecutive minutes cleaning something, usually to completion. Four days in a row I’ve done this. Would that be considered spring cleaning, and, if not, how many days in a row must I do it before it qualifies. Tomorrow, I’m planning on cleaning out and straightening up the linen closet. I KNOW, RIGHT?

I hope I have not jinxed it by speaking openly about it. I’ve been trying to get rid of things. I’m not going all KonMari here. To be honest, way too many of my possessions “spark joy” in me. Or maybe I’m not quite getting the concept of sparky joy. I think I could brutally clean out my closet. But books, dvd’s, action figures, pens and colored pencils, coloring books, sketch books, fountain pens, tarot decks, bottles of nail polish, board games and cat toys give me way too much joy to get rid of. Isn’t it nice that my music no longer takes up physical space?

I did warn the cats that they had better start sparking joy in me. Ok, no I didn’t. They already do. Now I am going to go look up how to add a black frame around my images to this theme because that’s how much I’ve forgotten. It’s early days.

I read a post on Nerdist.com about hotels that are now offering special discounts to people who surrender their electronics at check-in, for a digital detox. Marketing this like it’s a good thing.

I think it is. Could you do it? I could. My only problem might be my iPad because I read on it. How about I surrender everything but my iPad, and I don’t have wireless access. Then it is nothing more than an expensive book. And Pocket Frogs. I shall promise to play no games. Only books. Or… maybe, I could just read books. You know… on paper?

What about you? Could you go for three days with no cell, internet, PS3, ect?

So far, and it’s only the 11th, this is the best thing I’ve figured out about 2011: How to read library books on my iPad.

When I first bout the iPad, I could not find a way to read library books on it. I had a feeling that would change eventually. In an attempt to live up to my “living like I’m broke because I am” resolution I decided to look into this again. And voila! There it is. How to do it. I don’t have to write it all out again, do I? You can just follow the link if you are interested. It’s easy peasy.

The best thing about the library is, I’ll take more chances with books if they are free. Yes, I might read an entire series of moderately crappy books, but as long as I am entertained, who cares? They are free. I am not reading a moderately crappy series right now, I’m reading “Gone, Baby, Gone” by Denmis Lehane, Book #4 in a series of books with detectives Patrick Kenzie and Angie Genaroo.

Speaking of reading, I’ve decided to try to read 150 books in 2011. I’ve joined a Goodreads group that lets you set your own goals, if I make it to 150 before the end of the year, I’ll just move myself into the 200 books group. I think I’ve finished 14 so far. Click on the link in the side bar if you want to see the books I am reading.

Ok, that’s it. I had not posted since the 4th, and since I am trying to strengthen my blogging musckels, I decided I had better check in. Now I shall go back to playing WoW and watching it snow outside while my Fireplace blu-ray dvd crackles on the tv. Cozy!

My first book review is up at Satan’s Bookclub. I’ve reviewed Frank Portman’s YA novel Andromeda Klein, a book I thoroughly enjoyed. But that’s not what Satan’s Bookclub is about, is it? It’s more important to recognize how potentially evil a book is, rather than the quality of story and writing. You becha!

Bit rusty at the reviews. I only published two the first time SBC was up. But I attempted a few more. I’m looking forward to honing my skills. 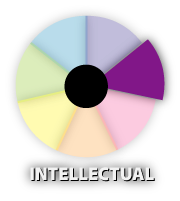 I love to read and I do it a lot. I also like to go to readings and book signings, something I used to do more often when I lived in the states.I used to read a lot of book blogs as well. And all of these activities led to creating Satan’s Bookclub with Louise. I created it, did a couple of reviews, but I let it slide. I don’t remember why. Probably met a boy online or something. wink wink.

In the last few months, I’ve been thinking about bringing it back. Suddenly, it was a week before Banned Book Week (the original inspiration for the site) and I jumped in and redesigned it.
With the exception of reading books, I feel that I have ignored the intellectual pie piece of my umm… life pie. I’m not learning anything, or using my brain overly much. That is evidenced by my lackluster blogging, for one. Satan’s Bookclub will, I hope, renew my deeper interest in books and book news, as well as force me to to think and articulate my opinions on the books I read.
In other words, I am going to exercise my brain. If you are unfamiliar with Satan’s Bookclub, you can read it’s history and manifesto here. Please stop on by.

Today marks the beginning of the ALA Banned Book Week. In honor of this, I will have a BIG ANNOUNCEMENT on Monday.

Ok, maybe it’s not that BIG, I don’t know. It could take off and be cool. Or it could whither and die, you never know with me. I don’t want to set you up only to see you disappointed. And, frankly, I don’t need the pressure. It would suck if you were expecting AMAZING and what you got was PRETTY COOL, you know?
Let’s just say there will be a FAIR SIZED ANNOUNCEMENT on Monday and see how it goes from there, ok?
Good.
Standard

It’s no wonder he’s a favorite of mine. He’s got my dream basement.

Neil Gaiman’s bookshelves. I realize he less than 10 years older than me, but I’m wondering if he’d consider adopting me. I will, of course, be keeping my mom.

I apologize, I’ve been more interested in working on my new blog design, then actually blogging. And I wish I could say that I’ve been working on it diligently. I was. But then I decided I needed to watch all three seasons of Veronica Mars again. It happens. At least we’ve had a run through all seasons of Buffy and Angel in the last year. And House. And BSG.

The fact is, I’ve changed my design three times since I’ve started. And while I’ve been spending most of my time on content and layout within MT4, I at least have to have a banner done, to keep in mind while I work. So I am now working on my third banner with built in roll over buttons. It’s so sad how much I have forgotten about Photoshop and Illustrator and such since I left my job. I used to be able to make a roll over button in my sleep. Well, just before I went to sleep maybe. Now I have to LOOK IT UP!.

I am updating my reading list over on the new design, I used to be really good at keeping track of my books. So I am working towards that again. I have also joined Good Reads, just haven’t bothered to add a button or link in the old design. Because I’m all about moving forward, baby. Anyhoo, be my book buddy if you are on Good Reads, won’t you please?